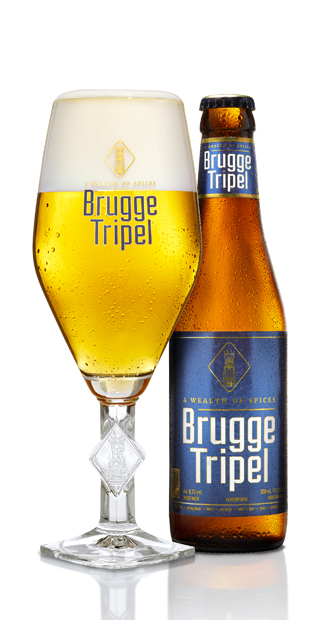 The Bruges city beer of old, potent and bitter-sweet BRUGGE Tripel has a beautiful golden-blond colour and a firm, rocky head, leaving a trail of Bruges lace on the glass. The aroma has a typical touch of smoked phenolic, and the flavour is bitter, rich and creamy.

The secret of the BRUGGE Tripel city beer is the unique composition of the “gruut” blend of herbs and spices used to enrich its flavour and aroma. In Bruges, anyone brewing beer was obliged to purchase “gruut” from the city’s herbs and spices shop, known as the “Gruuthuse”. Jan van Brugge and his descendents, who later changed their name to Van Gruuthuse, had a monopoly on the sale of Bruges “gruut” that lasted late into the 16th century. At the same time, taxes were levied to the Count of Flanders. In BRUGGE Tripel, this medieval tradition continues.

BRUGGE Tripel gets its willful aroma from the use of a topfermenting yeast strain which gives a dominant, smoked, phenolic aroma.

BRUGGE Tripel undergoes a second fermentation in the bottle. During filling, some sugar and yeast are added which ferment into alcohol and carbon dioxide gas in the “hot chamber”. This is why BRUGGE Tripel has a high carbon dioxide content, which gives the beer added zest. The yeast sediment at the bottom of the bottle protects the beer against oxidation, thus preventing rapid ageing of the taste. The presence of the yeast causes the flavours to develop over time. This makes BRUGGE Tripel a true stock beer.

Moment:
Connoisseurs’ beer – For drinking to relax or as a personal treat – Especially alone, but also in a small group